The Raptors signed Fred VanVleet to a new contract that will keep him in Toronto long term. Let's grade the deal.

The Raptors and Fred VanVleet agreed to a new four-year, $85 million deal on Saturday, securing a long-term commitment to keep him in place for the foreseeable future. VanVleet, 26, was a vital member of Toronto’s title-winning outfit in 2019 and took a step forward last season, becoming a full-time starter and averaging 17.6 points, 6.6 assists and 1.9 steals. VanVleet is renowned for his toughness, and was the primary off-season priority for the Raptors. Let’s grade the deal. 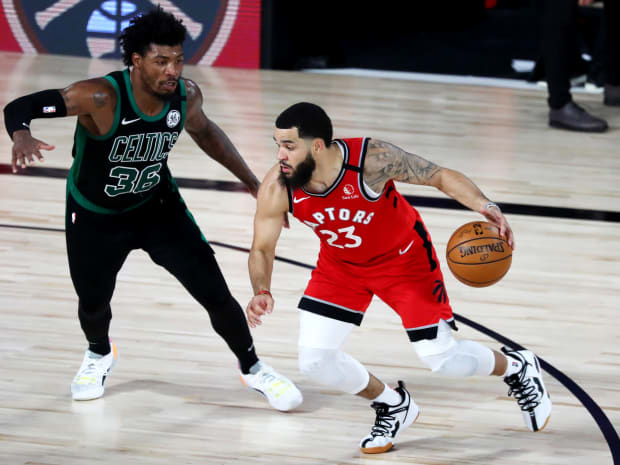 In a relatively dry free-agent market with limited cap space to go around, it always seemed like VanVleet’s best option was going to be staying put. The Raptors spent appropriately to ensure he came back, handing out a deal very similar to what Malcolm Brogdon got from the Pacers last season. The number feels appropriate for both sides, and with 34-year-old Kyle Lowry entering the final year of his contract, retaining VanVleet, a player who means more situationally to Toronto than he would have anywhere else, helps to retain continuity and ensure the Raptors are covered at point guard in the long run. Most expect them to try and be players in free agency next summer, and they’ll still have plenty of cap space to play with.

After beginning his career as an undrafted free agent, VanVleet signs his first major deal and will be able to cash out a second time as he enters his 30s. His production falls largely in line with what he’ll make moving forward, as someone who capably plays both ends of the floor, shoots 39% from three on volume, finishes effectively for his size and does an excellent job taking care of the ball. VanVleet’s shooting and intelligence have enabled him to play either guard spot and pair with Lowry effectively, and he’s widely respected around the league for all he brings to the table. He may never turn in an All-Star season, but his numbers have improved each year, he’s been highly durable and he’s only now entering his prime years, leaving room for more growth. This is a win for both sides, and ensures the Raptors will remain competitive no matter what happens next summer, with VanVleet and Pascal Siakam anchoring their lineup for years to come.

Kemba Walker Out Until January After Stem Cell Injection