Alabama's Version of The Drive Keeps Its Playoff Hopes Alive

QB Bryce Young leads a rally for the ages to complete an Iron Bowl comeback that keeps Alabama in the College Football Playoff race.

AUBURN, Ala.—For 58 1/2 shocking minutes in Jordan-Hare Stadium, Alabama’s explosive offense was a dysfunctional mess. The nation’s No. 2 scoring team didn’t find the end zone once within that time, trailing three-touchdown underdog Auburn 10-3. After a deft Tigers punt was downed at the 3-yard line, the chances of the Crimson Tide going 97 yards in 95 seconds to tie the game seemed less likely than Nick Saban taking up stand-up comedy.

This looked like another houndstooth horror show at Jordan-Hare for Saban, more pain on The Plains. He owns the entirety of the Southeastern Conference, with the exception of this one plot of land. Saban entered Saturday’s game 3-4 here as Alabama coach, having lost the past two meetings and three of the past four. Wild misfortune kept happening to the Tide in this stadium, from the Kick Six in 2013 to a pass that bounced off a receiver’s backside and was returned 100 yards for a touchdown in 2019. Now here came the Great Offensive Meltdown of ‘21, with Alabama careening toward scoring its fewest points in a game in the Saban Era.

Then Bryce Young turned into John Elway. The Alabama quarterback’s version of The Drive — a 12-play masterpiece of poise under pressure — took its place in Iron Bowl lore. The stakes weren’t quite as high as Tua Tagovailoa-to-DeVonta Smith to win the 2017 national championship, but Young-to-Ja’Corey Brooks will be remembered forever in this state.

The game would not be won until the fourth overtime, 24-22, but Young kept it from being lost in the final seconds of regulation. After looking like a flustered young quarterback all game, Young kept making plays. His top receiver, Jameson Williams, had been ejected for targeting on punt coverage in the first half. His line had been in disarray. A loss would doom the Tide’s College Football Playoff hopes. The fan noise and weight of the moment could have folded a lesser player. 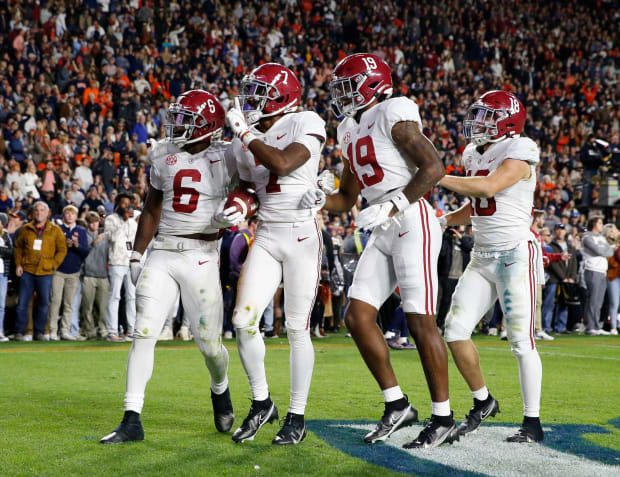 On Saturday, Alabama posted its first win at Jordan-Hare Stadium since 2015.

“I had all the confidence in the world,” said Young, whose Heisman Trophy campaign appeared to be in tatters until the literal last minute of the game.

“Not too much was said,” Alabama receiver John Metchie III said of the team’s huddle before the final drive of regulation. “Not too much had to be said.”

With the season on the line, this is what Young did: on a third-and-10 from the 3-yard line, Young stepped up to avoid the Auburn rush and hit Metchie for 22 yards. He scrambled for nine on the next play. He hit scarcely used freshman Brooks for 21 — just his third collegiate catch. On a fourth-and-seven from the Auburn 42, Young hit Jahleel Billingsley for 14 to the Auburn 28 — Billingsley’s only catch of the game. A raucous stadium started feeling very nervous, as the Tide kept coming.

After a couple of incompletions, Young faced another third-and-10 with 29 seconds remaining. Brooks took off on a go route down the right sideline, and Young laid the ball out for him. Defensive back Jaylin Simpson stumbled amid some contact. Brooks went up for the ball, then got his right foot down as he secured the catch, and Alabama was finally in the end zone.

For Brooks, his first college touchdown was as epic as it was unexpected. The rangy Miami product almost certainly would not have been in the game if Williams hadn’t been ejected. Saban afterward referred to him only by his uniform number: “Number 7, that was a great catch.”

Said Young of Brooks’ sudden star turn: “When your number’s called, be ready. He made a really big play. In a game as big as this, to run that route and make that catch, that says a lot about what kind of player he is.”

Kicker Will Reichard’s extra point sent the game into overtime tied at 10, and the stadium sagged. That a game of this magnitude came down to the current gimmickry of college overtime — a two-point conversion contest after the first two overtimes — was unfortunate. But those are the rules, and after Bama stopped Auburn and Young hit Metchie on an out route for the winning points, the Tide’s national title hopes stayed alive.

“Over and over and over,” Saban said, “we kept coming up with plays when we needed to make plays.”

Alabama made the clutch plays to pull out the victory, but Auburn opened itself up to heavy second-guessing with a couple of late-game decisions. The Tide should have had 40 fewer seconds to run that last drive if running back Tank Bigsby hadn’t run out of bounds and stopped the clock with less than two minutes remaining, allowing Alabama to save a timeout. “Here’s the thing,” said Auburn coach Bryan Harsin. "Guys that are running the ball are fighting hard for yards. Ideally, you stay in bounds, but guys are fighting for yards.”

While that was a spur-of-the-moment miscalculation by Bigsby, Harsin made an overtime decision that he had time to consider and he chose poorly. After Alabama scored to take a 17-10 lead in the first OT, Auburn answered with a dart of a touchdown pass from T.J. Finley to tight end Landen King. Finley was limping badly at that point after rolling an ankle, and Harsin should have gone for the win right there with a two-point try. Instead, he sent out the kicking team and sent the game into a second OT. 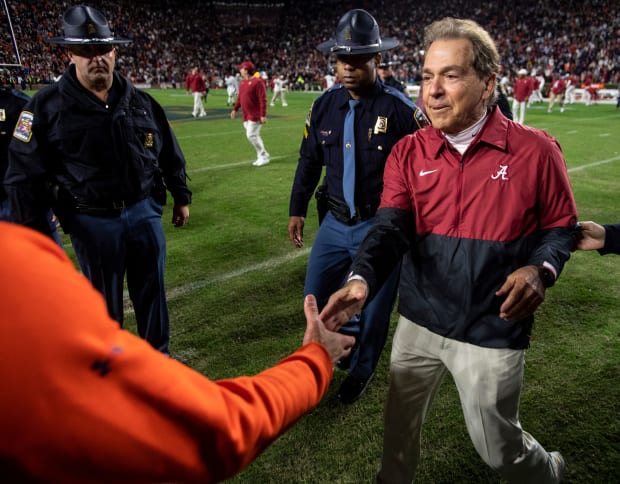 Coach Nick Saban and the Crimson Tide have missed the College Football Playoff only once since its inception in 2015.

In the third OT, the mandatory two-point stage, Auburn showed it had a dandy play for the situation: Finley lofted a throwback to tight end John Samuel Shenker, who scored easily. If Harsin had gone for the win and called that play, he might have been the toast of Auburn for pulling a massive upset. Instead, Auburn finished its season 6-6 and Harsin mounted what came across as a vigorous defense of his standing at the school. “I love it here, love the orange and blue,” he said. “We’re not going to let anybody distract us from being the team we know we can be.”

It might seem extreme for a coach to be under fire after his first season, but this is Auburn. Strange things happen here. Harsin was brought in from Boise State and his “outsider” status has been a topic of conversation. His refusal to discuss his vaccination status has added another layer to his debut season, and finishing on a four-game losing streak only adds to the noise.

Harsin was agonizingly close to turning all that noise into hosannas Saturday, but Bryce Young stole the moment for Alabama by leading one of the great drives in program history. Now, Alabama moves on to Atlanta to face No. 1 Georgia for the SEC championship on Dec. 4.

The Tide will have to play far better to have any chance against the Bulldogs, but just exiting Jordan-Hare with a win for the first time since 2015 keeps championship dreams alive. The 97-yard march to glory was an all-timer.

“Most of the time I remember the ones we lose,” Saban said. “But I think I’ll remember this one because of the way the players competed in the game and the comeback. … We were fighting like I’d never seen us fight all year long. Wow, what a game.”

Fully Focused on the Heavyweight Division, Ryan Bader Is Ready to Defend His Title