Those who thought College Football was becoming too stale—think again. The final week of the regular season rattled SI's Top 10.

How’s that for a rivalry week? The regular season’s final week is something sacred in college football—and boy, did it ever deliver in the Top 10. We got a classic in the Iron Bowl and memorable versions of The Game and Bedlam all with Top 10 implications.

The College Football Playoff race could get squirrely from here, but the stage is set heading into next weekend’s conference championship game. Yes, you could say that college football was becoming too stale, and now we look at a Playoff that definitely won’t have Ohio State or Clemson in it and might not even have Alabama in it if this weekend’s performance is any sign of things to come.

The Dawgs were the bee’s knees for their first of two in a row in downtown Atlanta. First up was hated rival Georgia Tech, who did not put up much of a fight from the very start. At the end of the day, Georgia has guys that do this, and Georgia Tech doesn’t.

Upset alert? I think not. After a few sluggish weeks, the Bearcats have dominated three teams they were supposed to dominate. Even with two Desmond Ridder interceptions, this one wasn’t in doubt.

No, you didn’t read that score wrong. The Wolverines got the monkey off their back and slayed the Buckeyes for the first time in the Jim Harbaugh era. There was no smoke and mirrors about this game, it was a straight physical beatdown on both lines of scrimmage. Aidan Hutchinson set a school record with three sacks and Hassan Haskins ran for 169 yards on the ground to put a beefy exclamation point. 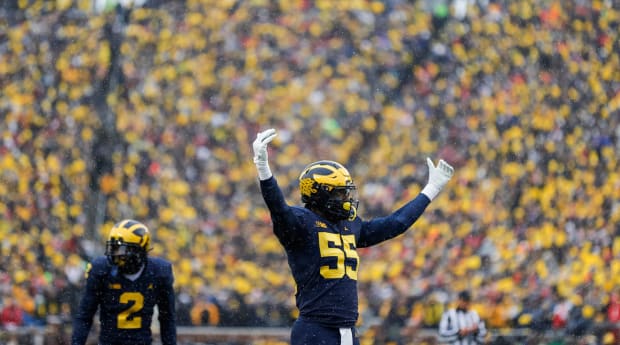 Don’t let the final score fool you, this game went to overtime tied at 10. The Tide simply could not block Auburn up front. The Tigers came with a dizzying array of blitzes to hassle Bryce Young and he had his worst game as Bama’s quarterback, although he certainly is not fully to blame. And he led a 99-yard two minute drill to send the game to OT in the first place. This isn’t a vintage Alabama monster, but they certainly still get the job done.

It’s not often you survive a rivalry game doing this:

But the Pokes did weather the storm and held on to finally beat Oklahoma for the third time in Mike Gundy’s tenure. This game had everything, and as they say … anything can happen in Bedlam.

And now the Irish play the waiting game. Notre Dame has arguably the best loss in the country as its one blemish in the early season game to Cincinnati and they have been ripping off dominating wins in the last few weeks. You don’t get many points for dominating this version of Stanford, but the Irish did take care of business. Notre Dame’s playoff case is pretty good as they wait for the chips to fall around them next weekend.

It is pretty jarring for the Buckeyes to have to sit at home during championship weekend. Ryan Day’s first conference loss to a bitter rival will certainly sting, particularly when you factor in how they were dominated in the trenches. Ohio State will need to re-tool up front to get where they want to go next season.

Not a bad Thanksgiving weekend for the Bears. Not only do they get the win in-conference doing all they could to set themselves up for a matchup in the conference title game, but they also look like they’ll retain head coach Dave Aranda for the foreseeable future. And thanks to Oklahoma State’s heroics, they’ll be in Dallas next weekend.

It wasn’t pretty, but it is a win over a rival and that’s nothing to scoff at. Oregon let Oregon State back in the game late but kept them at arm’s length and eventually won. Now a rematch with the Utah team that just stomped them last week awaits.

The Spartans capped off an impressive regular season in which they retained Mel Tucker to an extension earlier this week and then beat the Nittany Lions in a winter wonderland to finish with 10 wins.

Fully Focused on the Heavyweight Division, Ryan Bader Is Ready to Defend His Title