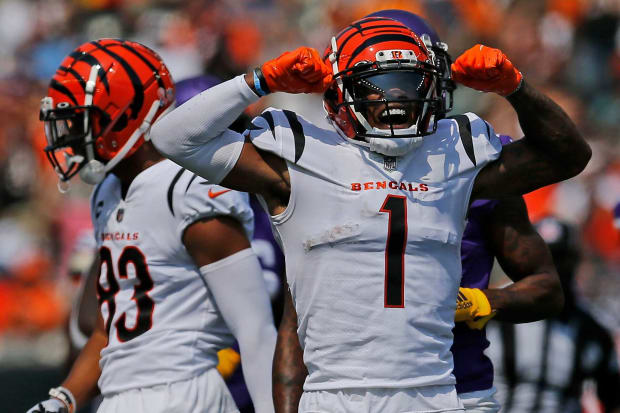 Ja’Marr Chase at Bears (1 p.m. ET, FOX): Drops, what drops? Last week, Chase put his critics in the closet, posting five catches for 101 yards and a touchdown on seven targets. The Bears have struggled against wideouts in their last nine games dating back to last season, allowing 16 touchdowns and nearly 40 fantasy points per game. Chase, Tee Higgins and Tyler Boyd should all be considered for fantasy managers.

Antonio Brown vs. Falcons (4:05 p.m. ET, FOX): Brown was the third Tampa Bay wideout picked in fantasy drafts, but he led the trio in points in the opener. I expect all three, Mike Evans, Chris Godwin and Brown, to be solid options this week when the Bucs host the Falcons. Their defense has surrendered the third-most fantasy points to wide receivers since Week 9 2020, including 41.3 points to the Eagles last weekend.

Courtland Sutton at Jaguars (1 p.m. ET, CBS): The Broncos have lost Jerry Jeudy for several weeks, which will leave more opportunities for Sutton. He was targeted just three times in the opener, but Sutton also led all Broncos wideouts in snaps played. I like him as a WR3/FLEX this week, as Denver faces a Jaguars defense that has given up 13 touchdowns and an average of 38.4 points to wideouts in their last 10 games.

Chase Claypool vs. Raiders (1 p.m. ET, CBS): Claypool was targeted just five times in the Steelers opener, but the matchup in Buffalo was a difficult one. That is not the case this week, as the Raiders visit Heinz Field. In their last 10 games, their defense has given up 12 touchdowns and an average of nearly 40 fantasy points to opposing wideouts. Diontae Johnson, JuJu Smith-Schuster and Claypool are all good options.

Marquez Callaway at Panthers (1 p.m. ET, FOX): Listed as a sit ‘em in this space a week ago, Callaway scored just 2.4 fantasy points against the Packers and shutdown CB Jaire Alexander. However, I like his chances to rebound in Week 2, as the Panthers have struggled against receivers. In their last nine games, their defense has given up 14 touchdowns (including two to Corey Davis last week) to enemy wideouts. 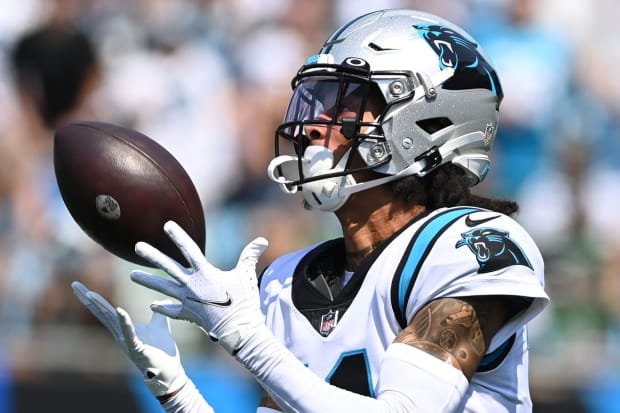 Robby Anderson vs. Saints (1 p.m. ET, FOX): Anderson opened the season on a decent note, scoring 12.7 points in a win over the Jets. He had just one catch on three targets, however, and the matchup was favorable. That’s not the case this week, as he will face a Saints defense that has allowed just six touchdowns to wideouts in their last 10 games. Anderson has also averaged just 9.8 points in three games against them.

Kenny Golladay at Football Team (Thurs., 8:20 p.m. ET, NFL): Golladay had an uninspiring Giants debut, posting four catches for 64 yards in a loss to the Broncos. He has another tough matchup next on the slate as the Giants travel south to face the Football Team. Their defense has allowed just eight touchdowns to wide receivers in the last 10 games, making Golladay a risk-reward WR3/FLEX at best this weekend.

Will Fuller V vs. Bills (1 p.m. ET, FOX): Fuller has finished his six-game suspension and will be back in action for the Dolphins when they host the Bills. Buffalo’s defense has been tough on enemy wideouts, allowing just eight touchdowns to the position in its last nine games. Fuller is also in a crowded group of Miami receivers, including DeVante Parker, Jaylen Waddle and Mike Gesicki, so there are many mouths to feed.

Marquise Brown vs. Chiefs (8:20 p.m. ET, NBC): Brown had himself a solid game on Monday night, scoring a touchdown and 19.4 fantasy points in a bananas win over the Ravens. However, I wouldn't chase the points as a tough matchup against the Chiefs is next on the slate. Their defense has allowed the sixth-fewest fantasy points to wide receivers in their last nine games, not to mention the fourth-fewest yards per game.

Michael Pittman Jr. vs. Rams (1 p.m. ET, FOX): Pittman was a popular streamer last week, but he failed to make an impact with just three catches on four targets in a loss to the Seahawks. As the Rams and CB Jalen Ramsey come to town, he'll have an even tougher matchup next on the slate. Since Week 9 2020, Los Angeles has allowed just three touchdowns and the second-fewest fantasy points to enemy wide receivers. 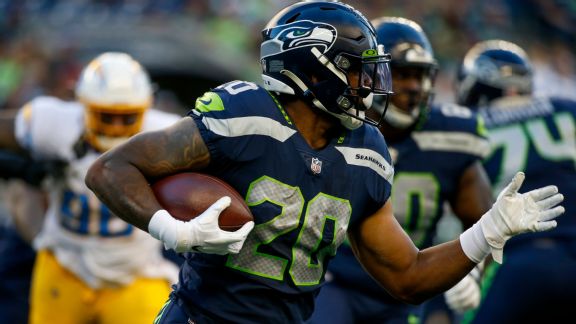 Week 2 inactives watch: Who's in and who's out? 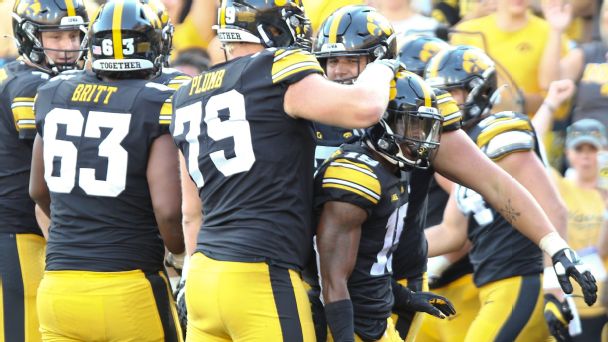 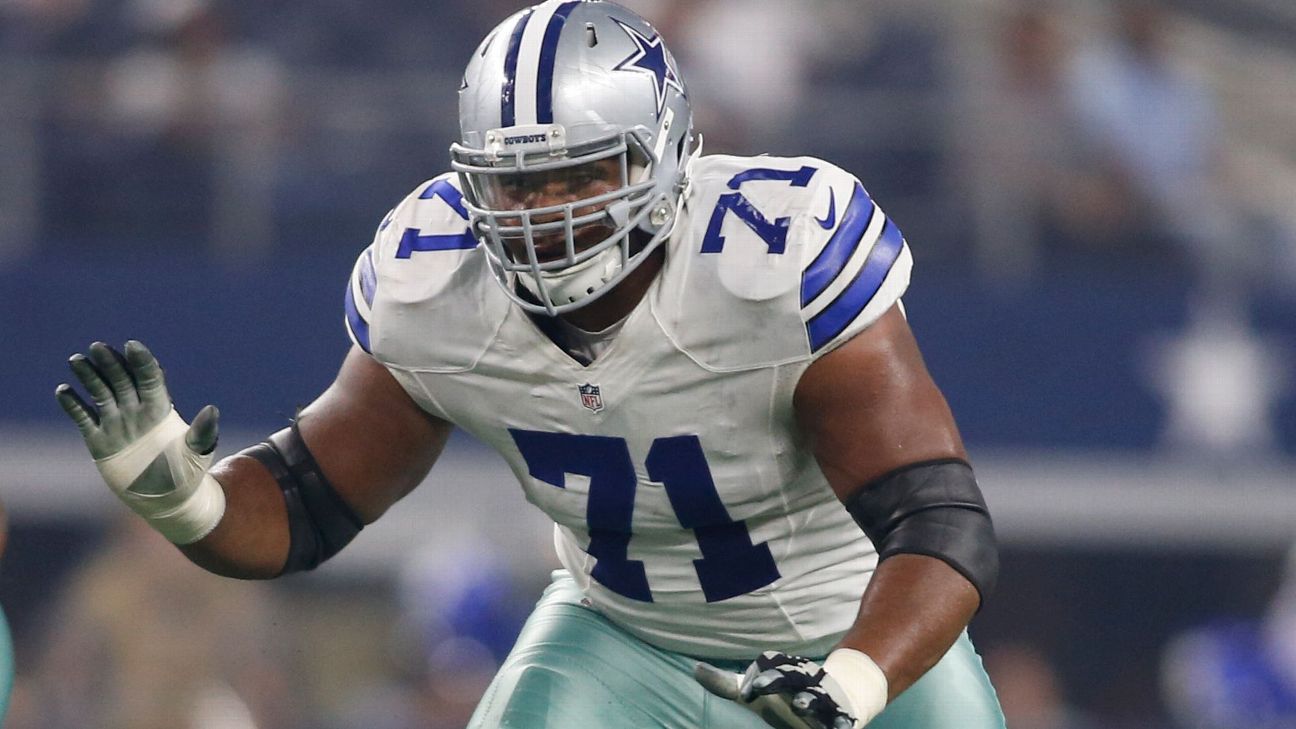